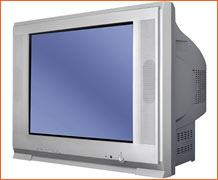 All older types of TV's are known as CRT 'Cathode Ray Tube' TV's. This is what they use to display an image. These type of TV's are bulky and although some CRT TV's do have a flat display tube (flat screen) they should not be confused with flat panel display TV's such as Plasma or LCD. CRT TV's break the signal into separate audio (sound) and video (picture) components. The audio part feeds into an audio circuit which uses a loudspeaker to recreate the sound that was recorded in the studio.

How does a CRT TV work?

Unlike LCD and Plasma TV's, CRT TV's do not produce an image composed of individual pixels, rather the image is composed of a series of horizontal lines drawn in sequence across the display. The video signal is sent to another circuit. This fires a beam of electrons (fast moving negatively charged particles inside atoms) down a long Cathode Ray Tube, as the beam flies down the tube. To precisely direct beams, a copper coil is used to create a magnetic field inside the tube This field move the beams horizontally and vertically. By means of applying varying voltage to the coils the beam can be positioned at any point on the screen. The electron gun circuit splits the video part into separate red, blue, and green signals.

The electron beams pass through a grid of holes called a mask, which directs them so they hit exact places on the screen. These beams hit the phosphors on the screen, this pattern of red, blue and green dots builds up into a coloured picture. The video circuit therefore can build up an entire picture by lighting up some spots and leaving others dark. 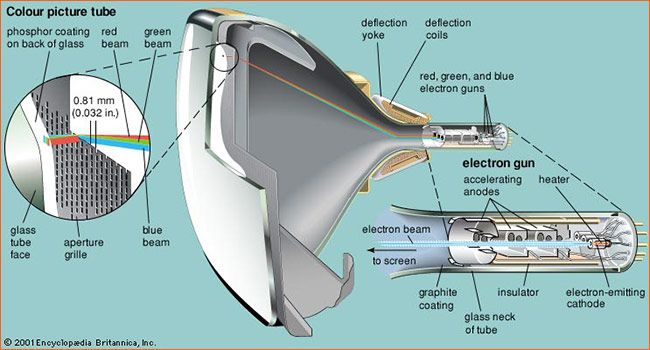 If you are looking for a TV repair technician, you have come to the right place. We repair CRT TVs at TV+ Video Doctor. One provisor though - and that it should be under 10 years old. This is because parts could be difficult to obtain, or they are too costly to make a viable repair. When looking to repair your CRT TV, it is best to get an assessment first. After getting a quote for the repair work, weigh this up against upgrading or updating your TV. With age considered, it may well be a better decision to repair your CRT TV - provided parts are available. On the major brand names, such as LG, Samsung, Sony, etc. the likelyhood of getting parts is much better. We have been repairing TVs since 1986, we have a wealth of experience and are certainly the preferred choice when it comes to professional repairs.

As TV technology changes so does our training and knowledge base. Our technicians are all fully trained and knowledgeable on what they work on. Each week we have training, not only technical, but on admin systems too. So all in all, you get the best of both worlds. Professionalism and efficiency at its best. Rest assured, your TV is in good hands. We repair and fix other household electronic devices, and have built a solid reputation that you can count on.

Fully Insured While in our Hands

TV + Video Doctor carries insurance while your TV is in transit - being transported to and from our workshops - as well as while on our premises. This is added peace of mind that you will receive your TV as you would expect it and should anything go wrong somewhere between us, your TV will be covered.

Most TV faults and errors require testing with electronic equipment by an experienced technician. We collect and deliver FREE of charge should you choose to repair your TV with TV+ Video Doctor. For a Repair Estimate, without the repair being carried out by TV+ Video Doctor, a nominal rate of R250 will be charged.

Book Your TV in for Repairs TODAY!

Once we have received your Booking Request, we will be in touch with you to schedule a convenient collection time.

Your Message Has Been Sent!   Thank you for contacting us.
Oops, An error has occurred!   See the marked fields above to fix the errors.
Close
TV Repair Booking Form